Well today I have an extra post for the fabulous Visible Image as they have a huge new launch day with new characters and lots of new sentiments and really thought provoking phrases that are just not covered by any other team. I just love the individualism and combination of a fabulous artist/creator and an ingenious Poet and wordsmith /media specialist in fact Helen and Mark are the opitomy of jack and Jill of all trades and I am sure they won't mind me sharing that with you all.

To See all the brilliant teams work on this new launch and catch up on The Visible Image blog pop over after you finished reading here and have a look through the blog to keep up with all the news etc.

In the meantime I created a Mixed media canvas which I would like to share with you all and I hope you love it as much as I do. 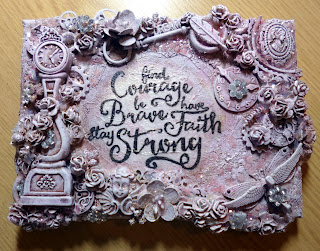 I realise it is quite hard to pick up on the shabby chic sort of colourway but it is actually pale pinks chalky whites brown and gold in all the recesses I used the stamping on 1 ply of tissue to get the image transferred to the canvas method for this one coating it in PVA glue to hold it on to the surface and over the entire thing to protect it. It will wrinkle and bubble but that's ok just leave it be to dry as it flattens itself out as it does.
I prepped my canvas then by adding a thick layer very roughly of texture Crackle paste around the sentiment in a frame shape, I heat dried it til it cracked then I added some hessian in places and also some cheese cloth and I dried that layer. I then took a stencil and ran some Grunge paste through the shapes which were splots dots , stripe , zigzag in a grungy pattern in random areas. dried again then began adding all the goodies.
After I had done that I started adding all my items to the canvas and here is a picture of all the items attached before all the colouring started. 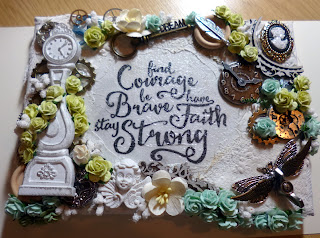 You can see all the items in their original colours and what they all are here with mixes of gold and silver , green and turquoise flowers and how I built up the winged dragonfly in the bottom right corner.
I covered the whole thing accept of course the main show in the centre which I shielded with card cut to size. To start I covered everything in Gesso in fact I did a few coats not only for opaque coverage but also for texture as some place I stippled the medium on rather than painting it will smooth brushstrokes. 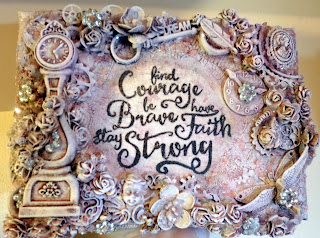 After the gesso I went  in with a vintage chalk acyclic paint in a pinky/lilac cool tone and covered everything then added several spritzes of colours in browns/golds/mauve's to the mix and dried in between each coat with a heat gun. 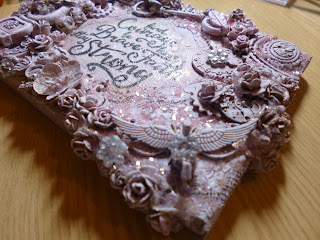 Here is that same corner finished with all its glitter.

I did not do a complete tutorial of every step as a piece like this is done in several steps and can be rushed but I  am a perfectionist it seems lol, but if you would like one please just let me know in the
comments. I strongly advise a hot glue gun though for a piece like this as it will take longer having to wait for every part to set. 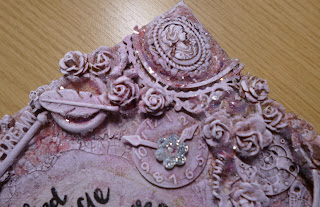 Here is the top right corner , I had some chipboard frames that were oval so I cut a piece of the frame and added that to the canvas then I found a little plastic cameo button , very ugly and cheapy looking lol so I made her beautiful with an old stone like texture.
I really just keep adding til I have a balance to the canvas and so it looks complete without being  over the top.( some may say it is if you like the minimal look but I do enjoy this style and you get to use up small left overs and such like.

Here is the finished piece again and I truly hope you will have a go or we can do a series on how too or some thing like it.
The stamp I used for this one 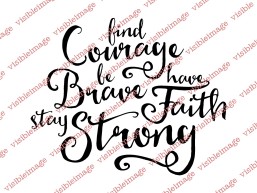 I absolutely love it.

anyway I hope you will go look at all the hard work put in by all for this launch and the amazing goodies made by a fab team.

love to all as always from my house to yours. 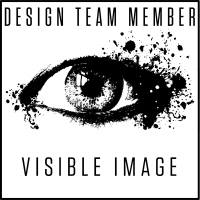