Today is Thursday and I have another card I put together using just the Bloom Beautiful pad the DT are using this month.
I think these water coloured feathers are sooo pretty in this paper pad and as an added bonus on the inside of the front cover there is a sheet with lots of embossed roses , tags ,birds and feathers which  you can cut out if you choose to. So I took some time and cut out a couple of tags and two feathers , I inked the edges of them using some Vintage photo distress ink and began putting this one together so without further ado lets get onto the tutorial. 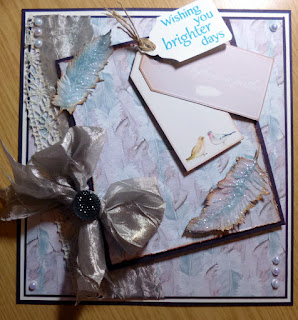 I started by choosing the paper which is a little washed out in this main photo as the feathers are actually a beautiful muted pink and blue with a lilacy feel where they intermingle with each other. 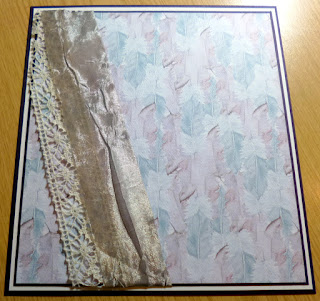 I cut a large square from the paper and matted it onto plum/purple coloured cardstock.I laid a piece of crochet lace in off white/cream on a angle on the left side securing it with tape on the back then I added  some silver/grey crinkle ribbon next to it an again secured on the back. I then added a mat of milk card and another in the same plum/purple to create a frame illusion to the eye and keeping it looking neat with no exposed edges of ribbon etc. 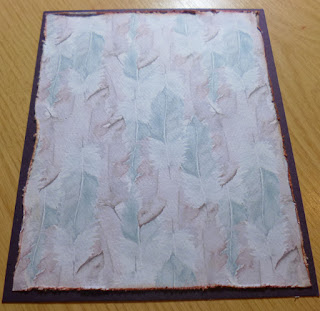 Next I cut a smaller piece of the paper and distressed the edges with the edge of scissors but you can do it with one of the paper distressing tools if you have one or sand paper or a file, anything rough will scuff the edges enough, then once the edges are exposed I used Vintage Photo ink again and just coloured the raw parts of the paper edge.
I matted that onto a piece of that same Plum/purple card I used on the frame. 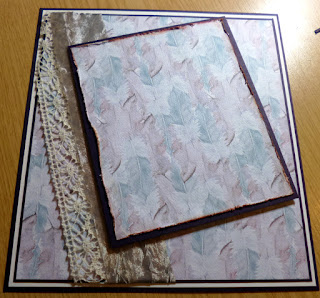 Using nice thick foam pads i adhered this last piece onto the frame on a jaunty angle for a little added interest and I kept to the same angle as the two ribbons I wrapped around the card earlier. 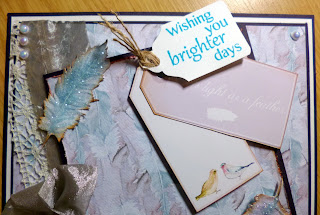 Here you can see a close view of the top of the card once I had fussy cut the two tags , the top small tag I took a sentiment from the Sunflower Bouquet stamps to die for that I will be using this month also and stamped it in salty Ocean ink to match in with the blue of the card backing. I have a paper punch that I used to cut out the little tag and wrapped some jute string through all three I glued the three tags together with a small bit of glue so they were adhered together in the correct position to add to the card in one go with that same thick foam. If you don't have the thick stuff , simply double up or you may prefer it not so thick if you have to post it etc. 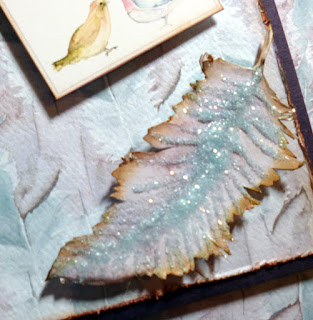 As I said I also fussy cut out two feathers and inked the edges , I also took some baby blue Stickles glitter glue and took my time piping it from the nozzle in very small feathery striped from the centre out all the way u each feather one in pink and one in blue to match the paper , and incidentally you can see it much clearer here nestling in the background and the small purple parts where the two colours cross over , which is why I chose the backing card I used for mats as it brings out those sections to the eye on the paper.
Once I added the stickles and while it was still very wet I tipped on Diamond sprinkles glitter from Cosmic Shimmer for Creative Expressions for extra sparkles. I really am appreciating the double glitter thing I have been rocking lately, it makes a huge difference to the amount of sparkle on the finished look. 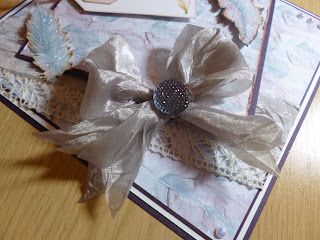 I tied a double bow with the same crinkle ribbon that we wrapped the card in earlier and I did the typical chocolate box bow and fanned it out a little covering the knot with one of the new silver toned dazzlers but it really is blue to match the backing and I love it, it is like an air force blue and this photo as always does not do it justice. 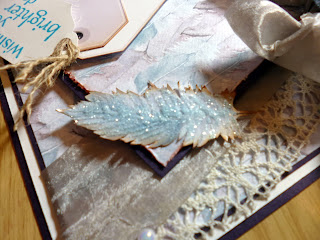 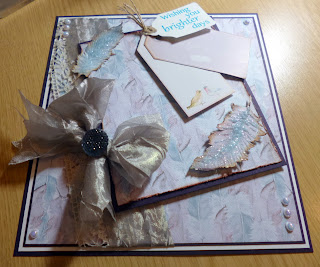 At this stage all that was left was to add some little pearls to the edges of the card in a three and one pattern just to keep the eyes interested even in the very corners.

So that is the finished card, I really wish I could show how beautiful and subtle the feathers are on the paper and that some how this card looks so washed out and I hope you can see how pretty it actually is.
Just something a little different, for those of you that didn't see last weeks post the paper pad I used for this fabby backing was The Boom Beautiful 12x12 paper pad. 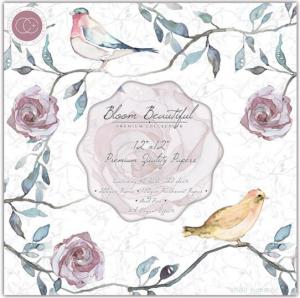 Don't forget to come back tomorrow for the Big Pink Blog hop with Visible Image.
Have a lovely Thursday and huge crafty hugs to all from me.