Thanks for stopping by yesterday to see my little travel/theme Visible Image Inkiness and today as the title suggests haha is the turn of Creative Expressions of course.
This one looks easier than yesterday as I am really am into my inks, paints etc but it took quite a while.
Those of you that are following the blog will know over the last few weeks I have been playing a little with stitching paper for some of the designs just to add a little extra zing as it were to my creations, I don't like things looking really flat and do not feel that clean and simple is really my forte as it were, so I do like to play with embellishments and extras.
Anyway I have a tutorial for you  on today's card too for those who don't like so much ink etc. 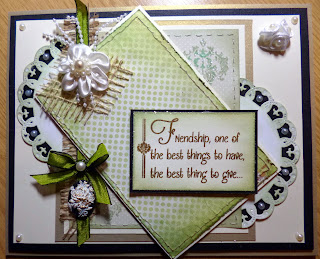 This card actually has a lot of components so bare with me as we go along. 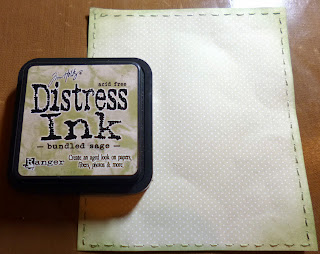 Here I took a piece of paper from the Romantic Garden Couture Creations paper pad and this is actually the back of it, I stitched all around the edge in a simple hand stitched running stitch, I do not have a machine as I said last time but what I do is make lots of hole in a straight line and then stitch through them it keeps the line straighter. I also distresses the edges with the little Tim Holtz distressing tool but scissors will do the same job, just be careful. Then I used the Bundled Sage Distress Ink and used it all over the edges and the stitching, so the cotton picks up the colour too. 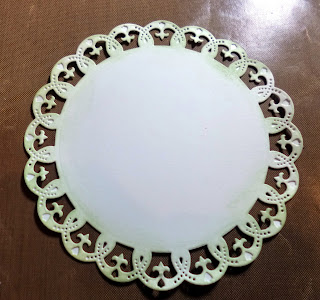 I then took the middle circle from the Spellbinders Royal circle set of 3 dies and cut out this circle , I then used the bundled sage again all over the edges I also decided that as some of the Fleur de lis were breaking off I would nick ever  other one out so I could add something else into those space but I didn't end up doing that stage til later. 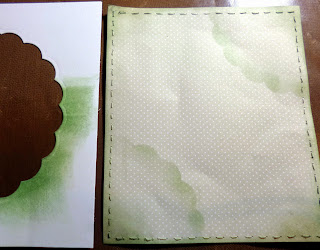 I thought I would use the negative piece I cut the circle from and inked through it just subtly with the same Ink, for a little added interest. 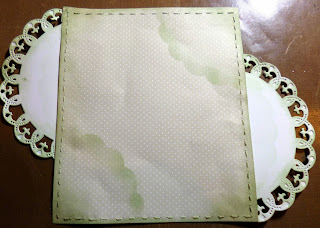 I decided to cut the die cut in half and add it to each side of the central panel and I used my cosmic shimmer glue for that. 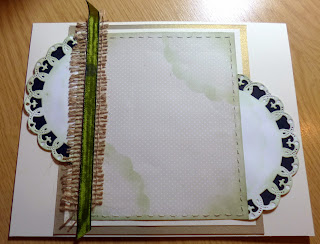 I then added a layer of milk card under that piece and a layer of soft gold card too. I then thought the circles needed something to make them stand out a little so I cut a piece of black and adhered each to the back of the die cuts and cut around the edge to make sure it was hidden other than the little windows. I took a larger piece of milk card and attached that across the entire back , I cut out a strip of burlap and frayed it, I stuck it down to the left hand centre panel and added a strip of Green ribbon to the top of that. 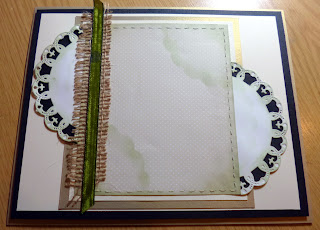 I added a few more mats here in this picture, a black one then some foam and another soft gold one to tie in all the colours. This is our base completed . 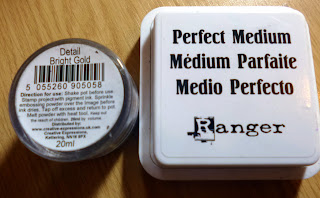 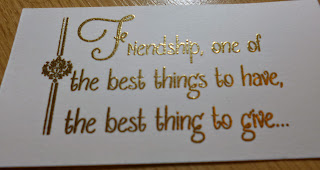 I inked the edges with the same ink of course and gave it a very small matching black mat. 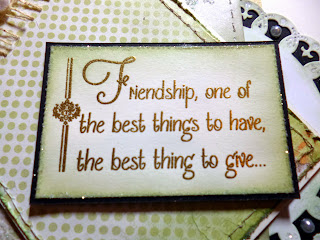 I also added lots of tiny glue dots all around the edge and used The Glitter Jewels Diamond sprinkles which is my fav glitter from Cosmic Shimmer actually.
I made another mat from the back of some paper again in a similar pattern but Gingham this time, it was  one that would blend well anyway  I did a double line of stitching and inked it around the edges a lot I also  mounted it onto a piece of milk slightly larger and added it on an angle to the base we made earlier using foam to raise it up. 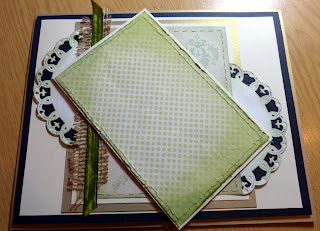 This is what it currently looked like with all the elements so far other than the sentiment we have ready to go. 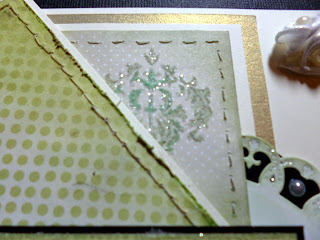 Here is a close up of the double row of stitching on this last piece and I took the decadent damask  Corners and icons stamp (the mid size) also from and just before I added the centre panel I stamped it on the top right and bottom left of the centre edging. I used a quickie glue pen and the same glitter  which I added a little colour to with distress inks and added that to the design, I snipped out the Fleur de lis as set out before and snipped  every other little flower  circles , I also did the same to the bottom left too. 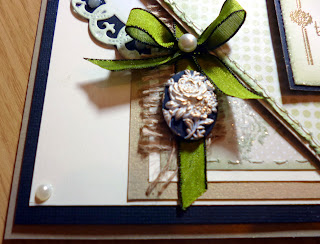 You can see the pattern on the bottom left poking out as you see it here and I added a small bow in green ribbon like usual. I then took one of the small flower cameos from Creative expressions and added some wax to the high points of the pattern. I also added a little bow out of the same ribbon. 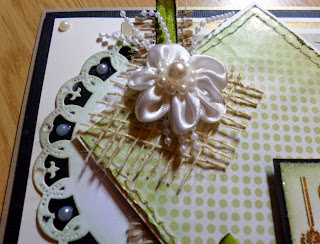 I added a blob of glue and a piece of wide burlap which I gave a small frayed edge  I pushed in  4 pearl string trimmings in white then I took one of our White satin flowers and added it to finish this corner. I also added a 5mm pearl to each of  gaps in the circle die cuts on both piece. 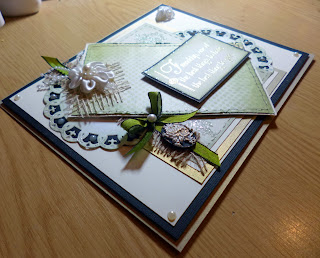 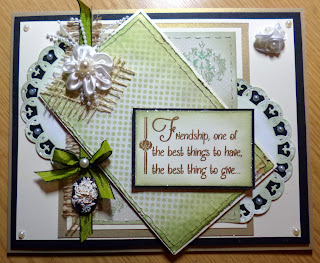 Oh except....  some glitter , I used some more of the diamond Sprinkles on each of the round pieces, just subtly on the dots rather than all over , I never like to go too far and try to keep things tasteful rather then gaudy ( If you know what I mean). ( Oh and I am quite sure I should stop far quicker than I do sometimes haha)

So that's today's post folks , I hope you liked it and even if green isn't your colour you could do this in any colour and it would be great for an inspirational gift for a friend , It actually isn't too raised so it still fits into an envelope this one which will hel with postage etc.
Thanks for all the comments yesterday on here and on facebook , and a huge welcome to the new subscribers , I am sure they sniffed out the cinnamon haha ( you will know what I mean if you looked at yesterday's post guys.)
I absolutely appreciation every comment whether you comment once in a while or once each post  I also love your input and ideas so if you can come follow on here or on facebook and we will keep building this blog together as it is our blog my Internet friends and family.


Have a lovely Thursday and I will see you very soon.